In 2012 we were lucky enough to spend 6 months in Mondron and Periana. Each day that passed was another day I found a new excuse not to tackle the big lump of a mountain that sneered down at me from the loftiest perch in the Sierra Tejeda. That mountain, of course, is La Maroma which, at almost 6800 feet (2065 metres) would be 3800 feet more than anything I had ever walked before. Fact was it was just too warm for virtually the whole of that visit to even think about attempting it.

Fast forward 2 years to late October 2014 and we find ourselves in Periana once more, this time for 5 months to the end of March 2015. So, what will the excuse be this time I pondered? Not fit enough? Camera bag too heavy? No guide book? No guide? Too much of a challenge at my age (just short of 61)? Yes my wife Bridget deliberated, all true enough - and of course she was right. However, being a pig-headed Derbyshire lad, none of that would wash with me, son of a coal miner, experienced hiker and photography nut. So, after much searching the Internet, talking to folk online and a brief taste of the mountain via the short Ruta Botanica (highly recommended) I checked the weather and settled on a date for my attempt. It would be New Year's Eve and I would set off at daybreak (08:15) giving me around 10 hours to finish the job, easily enough for the round trip.

The day arrived, blue skies, calm, almost windless, perfect. Parking at the Area Recreativa, Alcazar, Alcaucin (if you've not been there before check out the track up to this car park beforehand - it's not for the faint-hearted) I set off with camera bag & provisions (weighing about the same as a small child!) at 08:10 not knowing what the day might bring or where I'd end up. Above the car park is a wooded area with picnic tables. A little higher still is a sign for the aforementioned Ruta Botanica and just to the left of this is a track designed for rangers and mountain rescue 4x4 authorised vehicles only. It is sometimes chained preventing access. The track is known as Castillones and I followed this well-marked route (wooden posts with white & yellow painted bands) for the next 1 hour & 40 minutes (inc' stops) to its obvious end on reaching a tall metal contraption, probably used for lighting flares? With wonderful views everywhere, this was a natural place to pause and enjoy a proper rest and 20 minute sandwich and coffee break!

Just to the right of this point a mule track zig-zags its way higher up the now rocky terrain, still properly waymarked with the posts painted with white and yellow bands.

After another hour of quite strenuous but enjoyable walking and a little less than 3 hours in total I arrived at a ridge giving a clear and uninterrupted view of the distant and snow-capped Sierra Nevada, a wonderful sight and another natural spot for a short rest.

Resuming by following the path heading off to the right I quickly encountered my first icy path of the day and from here-on-in, walking would be trickier underfoot with almost all of the route now frozen. A combination of this part of the route being on the north side of the mountain and a low winter sun not reaching these slopes explains the conditions. Still following the excellent and frequent marker posts, the path meandered ever higher until a steep rocky ridge was met and the quaint (man-made) Fuente Santa was reached where, I refreshed myself with a few sips of the beautifully sweet, mountain spring water that pours here apparently until May.

Continuing before bearing sharp left and steeply uphill, my legs began to feel the pain caused, mainly, by the weight of the large but excellent F-Stop Loka pack on my aching shoulders. Soldiering on, slowly and then very slowly I find myself resting frequently which is not like me at all. Foot by foot I progress, never thinking about the top as, to be honest, I have no idea when (or where) it might come into view.

Suddenly from a rocky plateau covered in ice and snow the massive summit dome reveals itself and positively glistens as noon is reached and passed. Tiny figures can now be identified climbing and descending the north-facing mountain slope. Tired legs drag me towards it and I reach the foot of the ominous looking bank to what I assume is the beginning of the vague-looking path to the summit. The route is now hard ice and compact snow and progress is impeded and slowed as I made my painstaking way upwards. Following the waymarker posts is also now more difficult; one is fallen so its guiding arrow cannot be followed. Eventually, with leaden legs, I see the huge trig point which marks 'el pico' (the top). Finally!

Relieved and rejuvenated I made straight for the bizarrely tall, stone monolith and for some reason felt compelled to touch it and, involuntarily, exhale an inexplicable 'Ole!'

PHOTO LINK: The Mediterranean from the summit of La Maroma

After 30 minutes on the summit I began the icy descent by keeping Zafarraya directly ahead and resuming my alignment with the marker posts which seemed harder to follow coming down, at least for the first section. Soon enough however, I reached the Fuente Santa and then the ridge affording the first views of the Sierra Nevada earlier in the day as I said goodbye to the ice and snow and resumed easier going underfoot.

With just one or two stops for photography (more goats!) I made good progress to arrive at the familiar and clear Castillones track and an hour beyond this, 3 hours in total, I arrived back at the car. It was now 4.30 in the afternoon, and just less than 8 and a half hours since the walk began. Mission accomplished! 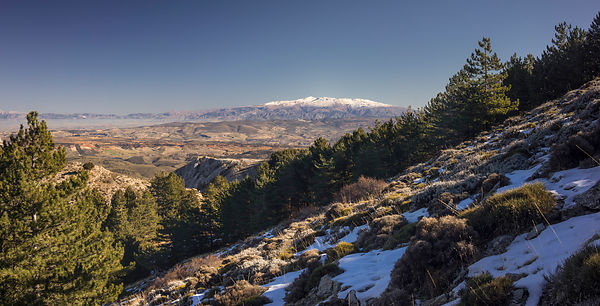 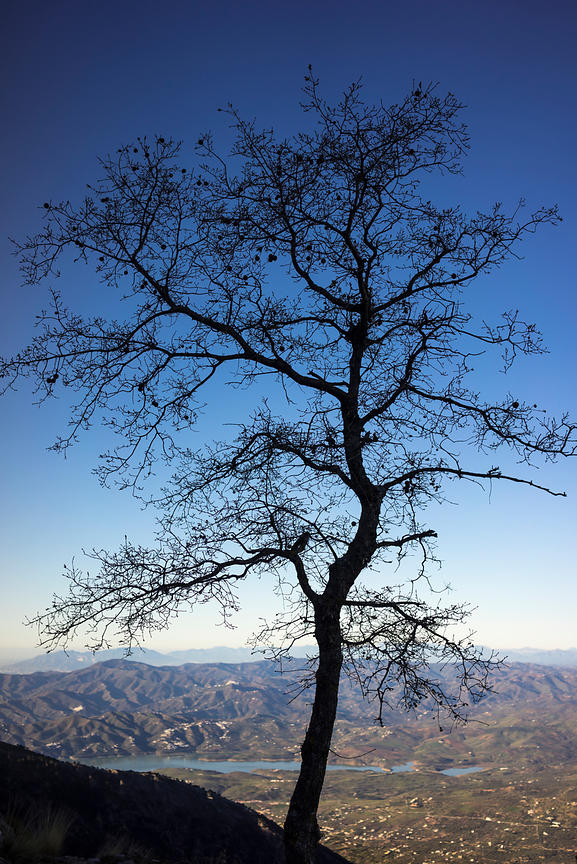 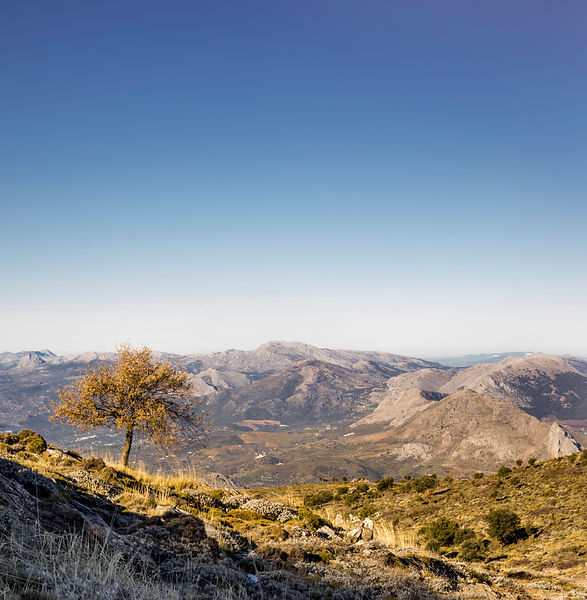 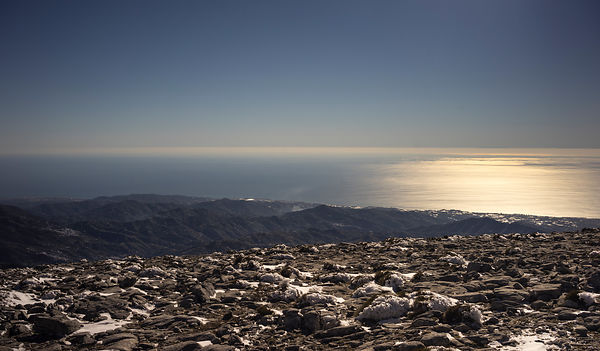 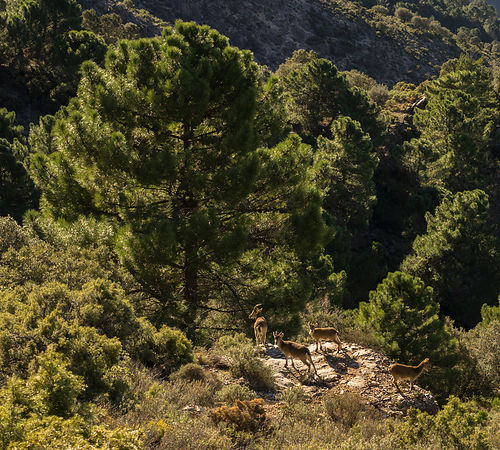 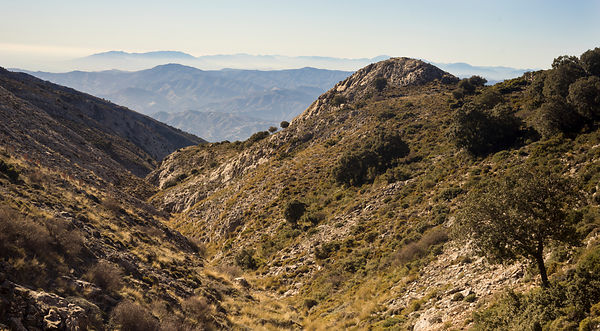